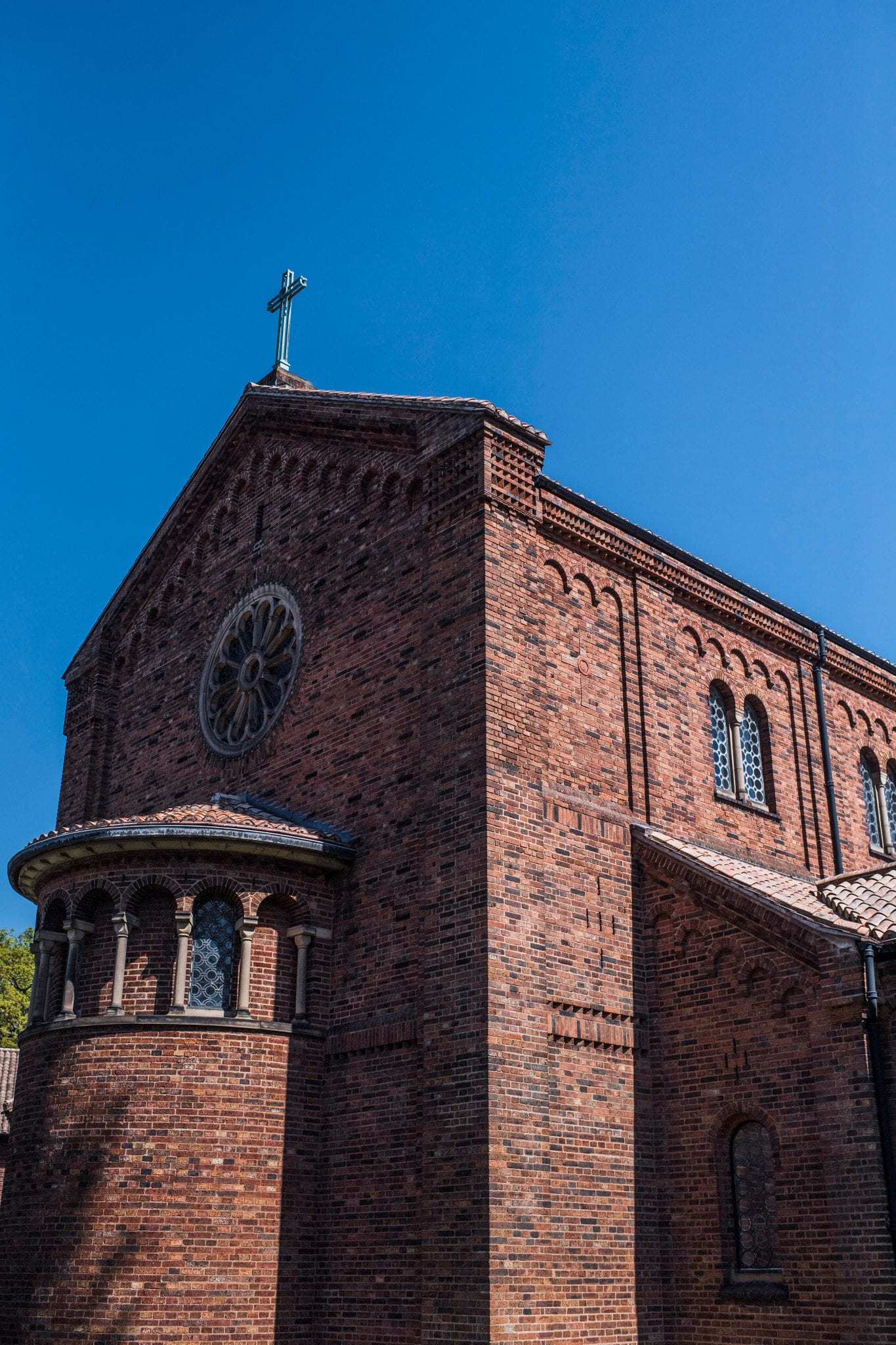 Bournville Parish Church stands at the heart of the model village and is a flourishing community of all ages, worshipping together in a relaxed but reverent atmosphere.  There are a range of children’s groups, contacts with local schools and a thriving youth and community centre - a church for the whole community offering care, compassion and celebration for life’s major events.

Bournville Parish Church is dedicated to Saint Francis of Assisi (1182-1226) the patron saint of animals and the environment. It is a place of calm and beauty and a place of prayer, we hope you will experience its peace and leave refreshed. Though a Quaker, George Cadbury always intended there to be an Anglican church as part of his 'garden village' so a Hall was built in 1913 and this Church followed in 1925. The architect, William Alexander Harvey of Harvey and Wicks, designed the church on the early Christian basilica style creating an open space, filled with light. The Church has always been a patron of the arts and crafts and over the years much has been commissioned where possible, from local craftspeople and artists.

Alexander Harvey, Architect (1874-1951): Harvey studied architecture at the Municipal School of Art in Birmingham and, aged just 20, was appointed by George Cadbury to work on decent quality homes at prices affordable to industrial workers in Bournville in 1895. Influenced by the Arts and Crafts Movement Harvey designed many of the buildings in Bournville and beyond.  His 1906 book, The Model Village and its Cottages: Bournville, helped establish him as an expert on housing schemes employed by several English authorities.

The stained glass window at the back of the church was installed in September 2006 in memory of Pat Fulford a former Parish Administrator; it was designed and made by local artist Catherine Pinnock.  The window is a rendition of the first lines of the Prayer of St. Francis: "Lord, make me an Instrument of thy peace..." and the window depicts doves ascending and descending, with outstretched hands at the bottom.

Catherine Pinnock:  Catherine studied ‘Ceramics with Glass’ in Birmingham, followed by an MA in Surface Design which focussed particularly on fused and kiln-formed glass.  She has been running her studio for many years and takes particular interest in the design and aesthetics of each commission. She has designed other windows locally and nationally for churches, chapels, hospitals and schools. 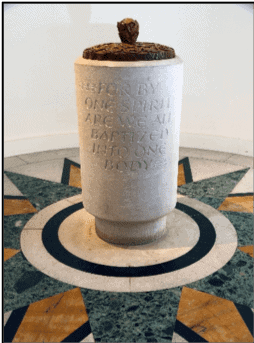 The Baptistery (the area surrounding the baptismal font)

The font in the Baptistery at the back (west end) is not the original but one given as a memorial in 1984.  It is made of Portland stone and was designed and made by John Poole. The inscription ‘For by one spirit are we all baptized into one body’, 1 Corinthians 12:13, signifies the power of the Spirit to unite people.  The wooden font cover (1972) is by Jack Wilson and has a carved circular motif of twelve animals and birds.

John Poole, Sculptor (1926-2009) font, the six middle Capitals and South Door Tympanum: John Poole refined his letter-cutting skills in the Birmingham design studio of William Bloye. Humanity was a strong theme in Poole's sculpting and he carried out much ecclesiastical work through a long-standing association with this church and the Cadbury family, particularly Sir Adrian Cadbury.  Poole worked up until his death and over the years gained increasing recognition.  He was warden of the Guild of Memorial Craftsmen, chairman of the Society of Church Craftsmen and honorary fellow of The Royal Birmingham Society of Artists. 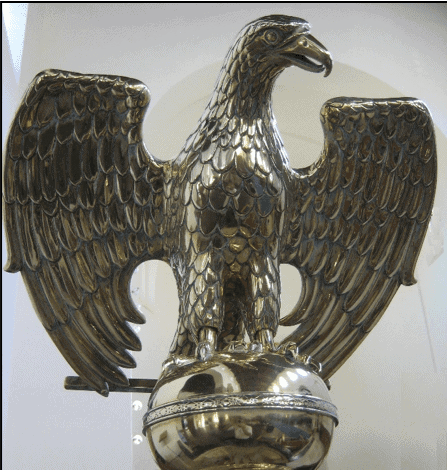 This is particularly special because it was made by a member of the congregation. Francis Thomas Ames (1870-1935) of Sycamore Road, a very able metal worker, cast it at the end of his garden after making casting equipment and moulds. The cost of the Lectern, £I00, was met by the teachers and children of the Sunday School and unveiled at the dedication service at St John’s (now the Church Hall) in 1921. Brass altar candlesticks were also designed and made by Francis Ames. 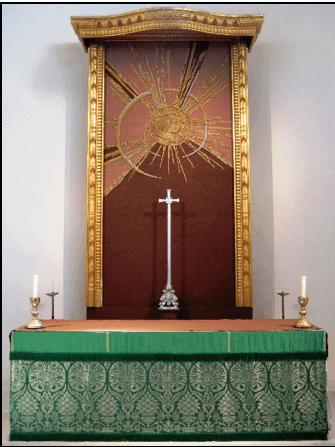 The Reredos (a screen)

Behind the Altar is the Reredos curtain designed and worked by Anne Hemming at Bournville College of Art in 1975. It is a representation of St. Francis' Canticle of the Creatures (a song of praise). The Brother Sun and Sister Moon are worked in macramé - knotted from gold lurex - incorporating large rhinestones which catch the light.

Annie-Rose Hemming:  Annie-Rose was born near Budapest, educated in Vienna and came to Cambridge in 1938 but caught by WWII she stayed in the UK. On the strength of an entry for an embroidered altar hanging at St Philips Cathedral, Birmingham she was asked if she would design a new reredos hanging for St Francis’ Church, Bournville.

This was given in 1947 in memory of Roland Cartland (1907-1940), MP for Kings Norton and brother of famous romance author Dame Barbara Cartland. He was killed at Dunkirk in 1940. It was designed by W. Alexander Harvey and made by William Bloye. Winston Churchill described Roland Cartland as ‘… a man of noble spirit who followed his convictions without thought of personal advancement’ 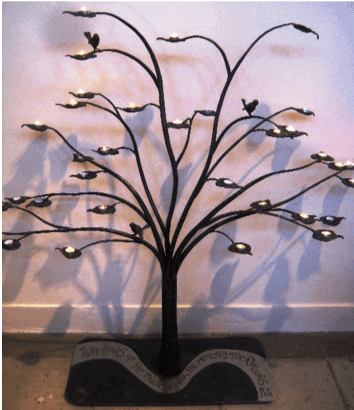 The votive (expressive of a wish) stand, in mild and stainless steel, was designed and made by Adam Barrett, a blacksmith of Feckenham, Worcestershire and dedicated in February 2012. The inscription ‘For the leaves of the tree are for the healing of the nations’ (Revelation 22.2) speaks of the Heavenly City. Candles are placed on the leaves as a sign of prayer for the healing of those we love and for troubled places in the world.

J.W & A.J. Barrett, Blacksmiths:  This is a family run company specialising in bespoke designer metal work. They are both traditional and contemporary blacksmiths, with all the benefits of a modern fabrication workshop. With over thirty years experience their work is of high quality and competitively priced. They have the skills to work in mild and stainless steel, aluminium, copper and wrought iron. 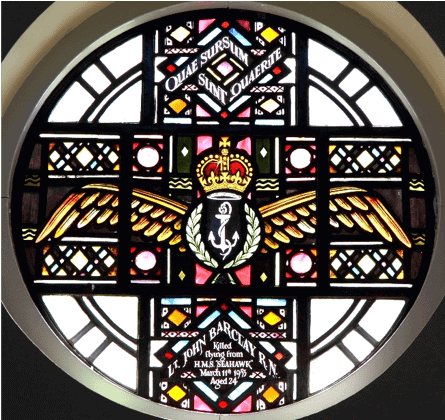 Memorial window is in memory of Lt. Christopher Barclay RN, killed on duty in 1953 flying a Seahawk at Culdrose Naval Air Station. It was designed and made by local artists Nora Yoxall and Elsie Whitford.  Lt. Barclay was the son of Mrs Robnett Walters and step-son of Rev. Robnett Walters, vicar of Bournville 1948 to 1952.  His school moto ‘Quae sursum sunt quaerite’ (Seek those things which are above), is a quotation from St Paul’s Epistle to the Colossians 3:1 .  The window was originally on the east wall but moved to the south wall when the Chapel was built.

Nora Yoxall, Artist (1892-1998):  Nora Yoxall was trained in Birmingham and always worked in partnership with Elsie Whitford designing and making windows in a small studio near Chipping Campden.  When Nora died in 1998 at the age of 105 she may well have been Bournville’s oldest resident.  She was buried at Blockley near the church which contains several of her stained glass windows. 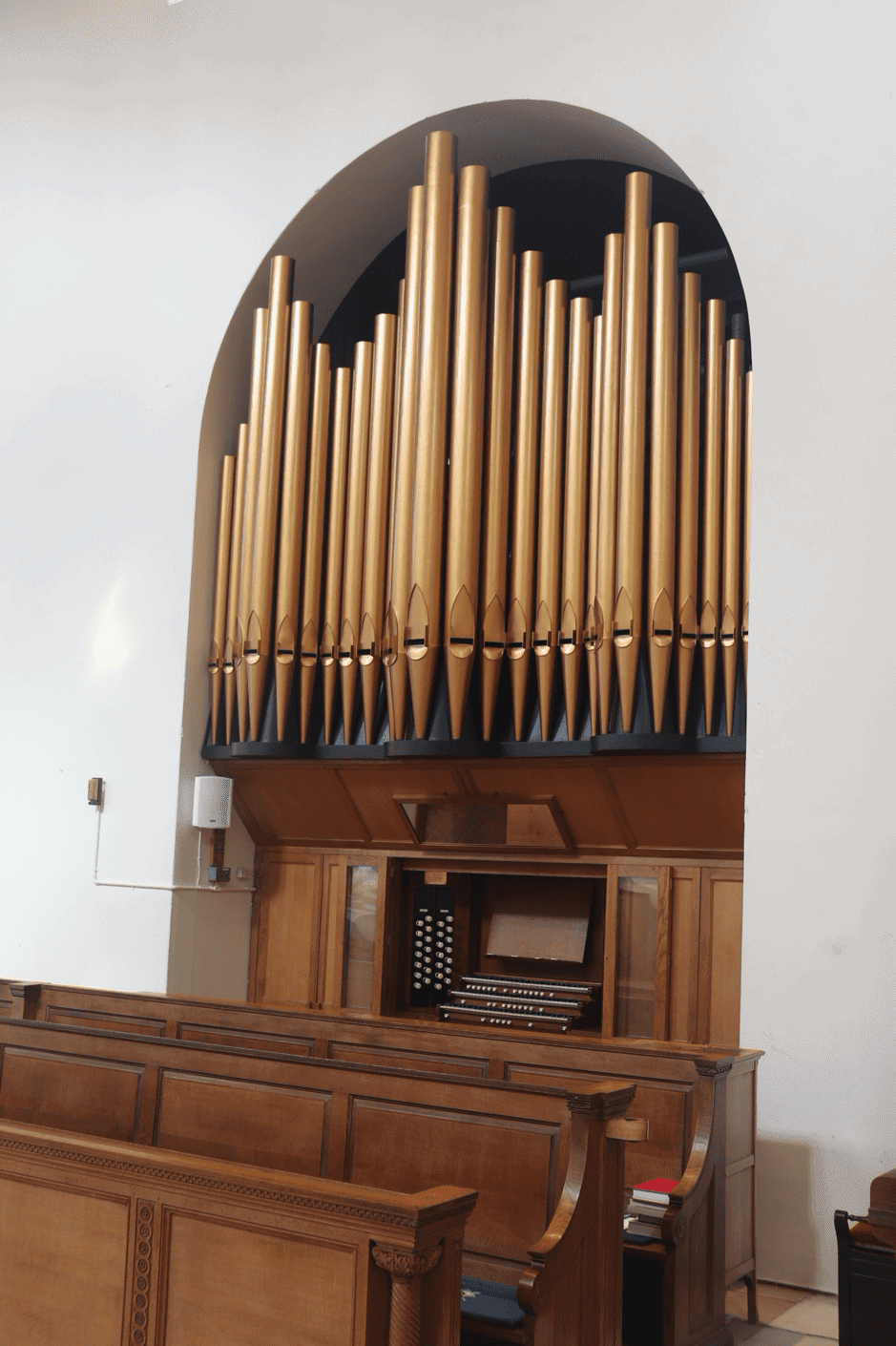 The organ, built by Nicholson & Co. of Worcester in 1903 was given to the Church by Cadbury Brothers in 1926. It was originally situated in the Girls' Dining Room in the Bournville Works where it was used to accompany hymns and morning readings. Having been restored several times in July 2018 Nicholson & Co. dismantled the organ, took it away to their Malvern workshop, and carried out extensive repairs as well as the restoration of all pipework. In January 2019 it was reinstalled, tuned and voiced, ready for Easter Day 2019. The organist Trevor Workman, who has also been Bournville’s carillonneur for over fifty years, is an international performer. 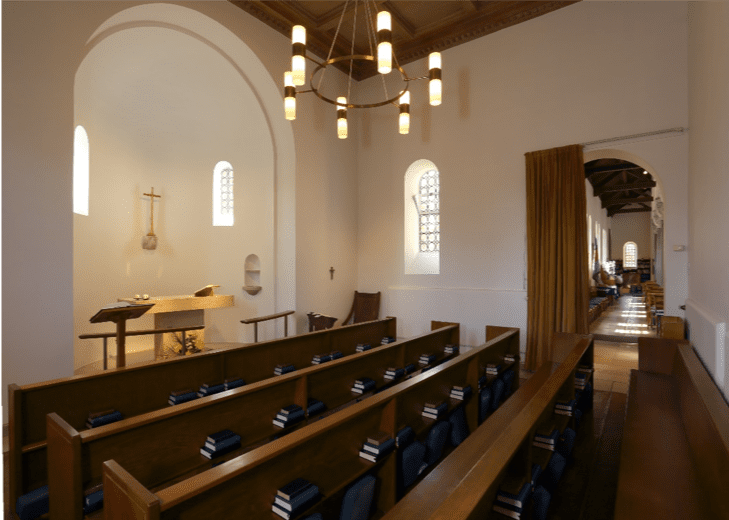 The Chapel was designed by Selby Clewer (details of the artist on page 8) and given by Laurence and Joyce Cadbury in memory of Julian, Anthea and Lindsay:  their son Julian St John Cadbury (1926-1950) died after an accident in France; their daughter Anthea Karen (1936-1964) and her husband Alexander Lindsay Aitkin Turner (1927-1964) died in the Innsbruck air crash. The commemorative tablet is to be found at the main entrance to the Chapel.  Other tablets here are in memory of the following: Laurence John Cadbury (1889-1982) born at Woodbrooke the first son of George and Elizabeth Cadbury.  Joyce Cadbury (1906-1988) wife of Laurence Cadbury.  Jocelyn Benedict Cadbury (1946-1982) son of Laurence and Joyce Cadbury.  Susan Jacqueline Cadbury (1930-2010) and Sir Adrian Cadbury (1929-2015) Chairman of Cadbury and Cadbury Schweppes 1965 to 1989 and grandson of George Cadbury.  Richard Aubrey Wootten (1931-2010) husband of Veronica Wootten, daughter of Laurence and Joyce Cadbury.  The Aumbry (recessed cabinet in the wall for the reserved sacrament) and Light and the Dove Corbel are further examples of John Poole's work.  The carved stone corbel jutting from the wall was designed and made by John Poole and given by Laurence Cadbury.  Resting on it is a cross in sycamore carved by John Morris.

Selby James Clewer, Architect (1917-2001):  Selby Clewer, a graduate of Birmingham School of Architecture and a member of the Society of Friends, worked for Bournville Village Trust as Chief Architect for 21 years.  In 1966 he designed the chapel here and St. David’s Church, Shenley Green (1970).  On retirement, he was made Administrator of Hanbury Hall and lived at Ice House Cottage in the grounds where many will remember buying garden produce, ice cream and honey sold in aid of charities. 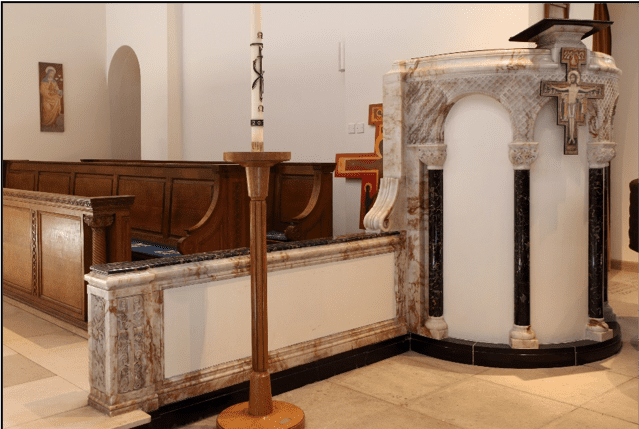 The original wooden pulpit was  replaced by a marble pulpit in 1930 together with the wall screens and sanctuary furnishings.  A new, larger altar and taller reredos were also added in 1930 and the oak choir stalls were added in 1928. 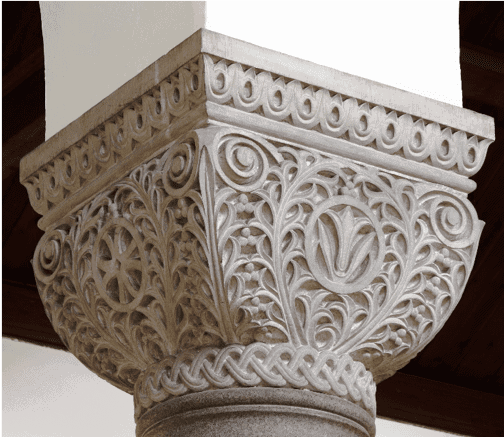 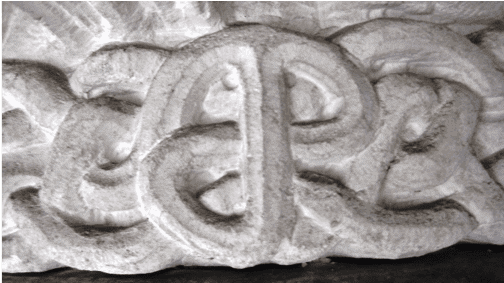 Ten Scottish granite pillars of the Church are capped by beautifully carved capitals. The four corner capitals were carved in 1925 by William Bloye as identical pairs.  The remaining six are the work of the sculptor John Poole and are all carved with different motifs.  The centre capitals were carved in 1964, and only one bears the sculptor’s initials ‘JP’.  The second set of capitals (from the front) are in memory of members of one family.  You’ll see their initials ‘SEM and GM’ (north capital) and ‘BGM, GMA and PEC’ (south capital) in the band above the astragals (top band of the columns). The fourth set of capitals were completed in 1979 by John Poole.

William James Bloye, Sculptor (1890-1975), carved the four corner capitals and North Tympanum:  William Bloye taught at the Birmingham School of Art.  He studied stone-carving and letter cutting under Eric Gill (Gill Sans is his most famous typography and was designed for the London Underground) in the early 1920s. Gill left a lasting impression on Bloye’s work.  As Birmingham's unofficial civic sculptor he worked on virtually all public commissions including libraries, hospitals and Birmingham University.  Locally, the fountain on the men’s recreation ground to commemorate the centenary of the firm was produced by Bloye in 1931. 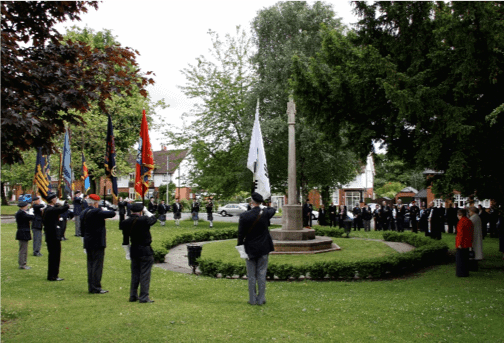 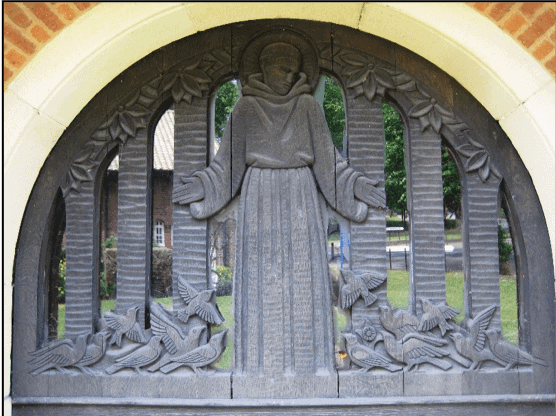 The Tympanum above the North door was carved by William Bloye in 1932, together with the pillars.  It shows the famous scene of St. Francis preaching to the birds. 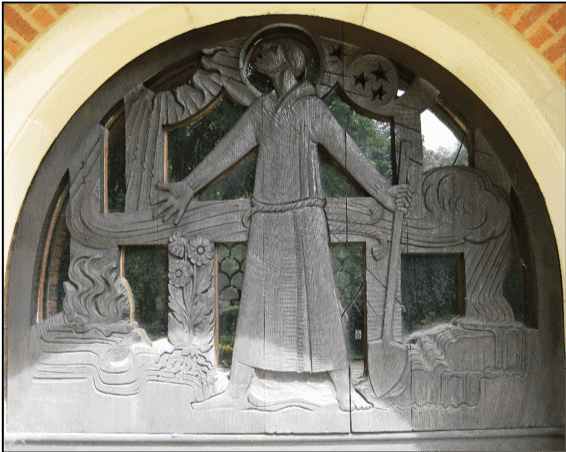 This depicts St. Francis’ The Canticle of the Creatures Brother Sun and Sister Moon carved by John Poole in 1962.  Brothers Wind, Air and Fire, Sisters Water, Mother Earth and Death can also be found in this carving if you look carefully.   St. Francis often referred to animals as our brothers and sisters.

More in this section

Who we are
Community links
Safeguarding

A church for the whole community.

To be a welcoming and loving, Christ-centred community, growing disciples of all ages and living out God’s love in Bournville and beyond

Find out all about us